Hop aboard a helicopter and see Sydney's best from the air.

One of the most popular kinds of tours in Sydney for those who don’t mind spending a bit of cash are the option to get airborne for a Sydney helicopter tour over the city, its harbour and its many famous highlights such as the Sydney Opera House and Harbour Bridge – both of which look even more spectacular than usual when viewed from above! With shorter scenic helicopter flights that range from a small sample of the views available to full-day tours that span distances as far as the Blue Mountains, the only limits are your spirit of adventure and the size of your wallet when looking to book a helicopter tour of Sydney. 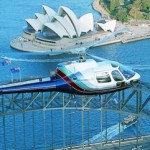 To book even more experiences in Sydney like Sydney attractions, helicopter flights, Skywalks and much more, book online with Experience Oz.